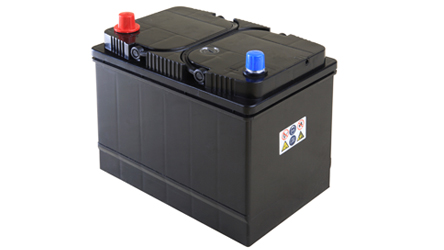 The best thing about these batteries is that they provide the correct amount of electrical energy to the vehicle to start the engine and to the ignition system. Plus, other systems like the indicators, stereos and all the other parts of the car that require electric power to work. There are two very important components of this battery, which are the lead oxide and electrolyte. These two components use a chemical process to create energy. Solid lead and lead oxide plates are flooded within an electrolytic solution that consists of a very small amount of sulfuric acid mixed with distilled water. When the electrical charge is drained from the battery, a chemical reaction takes place between the plates and the liquid electrolyte releasing electrons. Free electrons in the form of an electrical current flow through electrical conductors mounted on the battery and out via lead terminals providing the electricity required to start the car.

Discharge of the electric power of the battery into the engine means that sulfuric acid forms deposits onto the lead plates. When a battery gets recharged, it means that the sulfuric acid breaks down and returns back to their separate lead and lead oxide components. The water present in the batteries can be evaporated by the regular charging and discharging of the battery. This is why many batteries require water after some time. To avoid that now days manufacturers are making maintenance free lead acid battery that is fully sealed against leakage in which the electrolyte is in the form of a gel contained in separate compartments. The new design of these batteries also has safety features to avoid any high heat that can cause problems.

These batteries are being used in many things other than cars. Everything that needs an outside electricity source to ignite and function has this type of battery attached to it. Examples are UPS devices, generators and many other things. In a UPS, the battery gets attached to an electric system and keeps charging. When the power is off, the battery starts providing the stored energy back to the electric system and makes the appliances work. It is important to know that these batteries cannot supply as much power as an electric grid, so those appliances which need high voltage would not work with this setup.

Many companies are making these types of batteries, but no company is giving the best quality of these batteries to their customers other than Power Sonic Battery.

The Elements of a Proper Plumbing Estimate

March 11, 2021March 11, 20214 min read
Plumbing is one of the most competitive industries today. Because literally, time is money in…

The Organization Diet: Cut The Clutter & Improve Your Life [INFOGRAPHIC]

6 Ways to Turn Your House Into An Eco-Friendly Home

Remodeling a rental – is it worth the hassle?

April 7, 2020December 29, 20203 min read
With kitchen remodeling, there are tons of things to think about. From measurements, building plans…

How to clean your kitchen tiles in the right manner?

April 4, 2019December 29, 20203 min read
Cooking is simpler and quicker when the right equipment is stocked on kitchens. Perth is…

Reasons To Include A Kitchen Island In Your Kitchen Design

December 21, 2018December 29, 20204 min read
When planning a kitchen northampton design, there are two things that clients always want. One…